People: Early Memories of an Evacuee

The following has kindly been sent by John Tinham who was evacuated to Pensilva during the war. John has lived in the village of Farnborough in Kent since 1953 and which he tells us is now actually in the London Borough of Bromley. 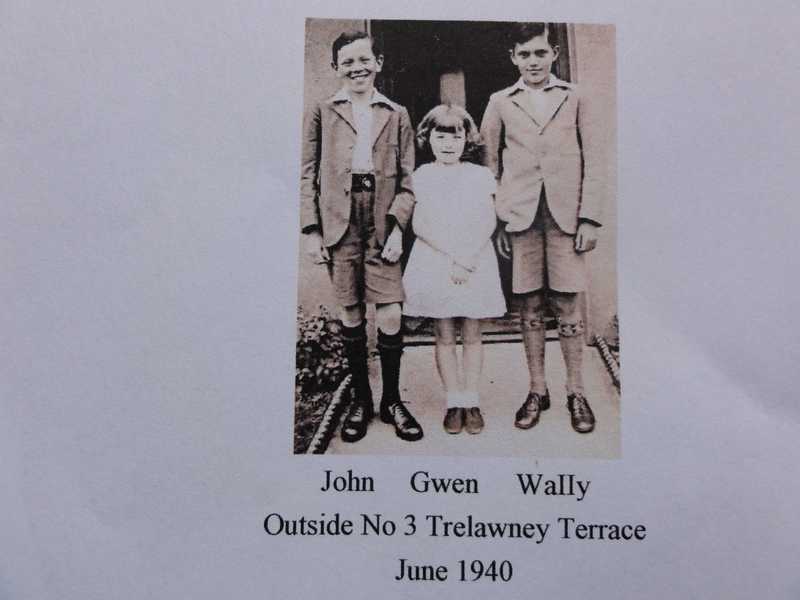 When the Second World War started my parents and I were living in Welling, Kent. At the tender age of 11, I had just started Westwood Senior School.

Mum and Dad decided I should be evacuated to somewhere safe and so I was packed off together with a younger child whose parents and my parents knew each other, to a farm at Mark Cross, East Sussex. My recollection is that this lasted only a month or two before we were hastily removed from there owing to domestic problems (the husband and wife actually fighting!) at the farm.

Still resolved that I escape the perceived dangers of remaining in Welling, I was again evacuated, this time on my own - I am an only child - to Dunton Green. (Every time we go to Sevenoaks we pass the school and the end of the road where I stayed). This venture also came to a premature end when I contracted impetigo from a pet rabbit and was returned home to recover.

Back again at Westwood School when, in early 1940, evacuation became the order of the day, presumably organised by the school/Local Authority? Most, but not all, children together with some of their teachers were encouraged to set off into the unknown!

I say 'into the unknown' because on that memorable morning, from outside the school gates, the children with labels on their coats, gas masks in cardboard boxes on string slung around shoulders and a motley collection of meagre luggage, said goodbye to their parents (I only to my mother as by that time my father was away in the Royal Air Force) and boarded a coach; nobody was told where we were going!

As it turned out it was a very long day. The coach took us to a railway station, I can't remember which, but there a steam train was waiting. We children all piled on, the excitement temporarily overriding any thought of homesickness as we settled into allotted compartments on a steam train with a corridor - this too was novel. The train journey took all day and, as we had consumed our sandwiches and whatever edibles our parents had provided, at the earliest possible moment, I guess our spirits flagged a bit as the day wore on.

The train stopped a number of time but we were not allowed to get off. Finally it was the end of the journey and gathering all our belongings, we alighted as dusk was falling. Everyone was checked, then marshalled together and we were walked up the long ramp to the station forecourt to waiting coaches (or perhaps they were buses?).

We had arrived. We were in Cornwall at a station called Liskeard, about twenty miles inland from Plymouth. All this time I was with a friend Wally, a boy from my own class at school and we decided that we would stick together, come what may! And so we sat together on the coach for what turned out to be a five mile ride to a village called Pensilva. Once there we were put in charge of the Billeting Officer, a Mr. Rich, who ran the Village Grocers and whom I remember well. Then we were taken to various homes in the Village to families that had agreed to take evacuees. Wally and I managed to stay together, and there we were two eleven year olds in a strange house with strangers.

I expect we slept well and I remember waking to the delicious smell of bacon frying, tempered by a strong longing to return home again! At breakfast we were each presented with two rashers of entirely fat 'bacon' complete with rind, which still had hairs on it! Obviously this was from a locally butchered pig: and there was cake (saffron), apparently quite normal in Cornwall.

We had all been given cards to send home giving our new address and we were quite resolved to say, "Please can we come home now" or words to that effect. However, after breakfast the two of us were taken back to the Billeting Officer. Apparently the family had decided that they didn't want evacuees after all; I like to think it wasn't just us! We were not the only 'rejects', and so together with a few other children we were 'paraded' around the Village until there were only three of us left, comprising Wally, me, and a girl aged eight whose name was Gwen. Walking down Fore Street (High Street) a lady appeared from No. 3 Trelawney Terrace who agreed to take all three of us! Although she and her husband (Lenie and Jack Smetherham) had no children of their own, they had many nieces and nephews in the village and so were well used to being around lots of young people.

Although the rooms were small, the terraced house was substantial and more than adequate for us, given the standards of the time. Upstairs we boys shared a bedroom. Gwen had her own room, which still left the main bedroom for our 'foster' parents. Downstairs the front door, approached from a tiny front garden, opened into a room that was the hub of the house, which had a stone flagged floor, a large open range cooker, a huge Welsh dresser, a couple of chairs by the range and table and chairs by the window. This room gave access to the enclosed staircase and also led on through the back to a scullery and thence to a washhouse. To the left of the front door was the 'best' room, only used very occasionally. Coming from a house in the South East with all mod cons it was a shock to find there was no running water, no main drainage, no bathroom or inside toilet, no electricity, therefore no electric light or electric power (only oil lamps and batteries) and drinking water had to be collected from a well, operated by a hand pump, a few yards away across the other side of the road - fortunately, little or no traffic. And, of course there was no telephone, but then who had a telephone in those days?

We were very fortunate in that our newfound 'parents' were extremely kindly. It is amazing how quickly children can adapt to changed circumstances, as no doubt did the adults, and it seemed that we soon settled in, the thoughts of a desperate need to return home diminishing.

Maybe this newly formed family, along with many another, thought that the war would be over by Christmas, but as we all now know this was not to be.

Although Wally and Gwen eventually returned home before me, this was to be my home for the next five years, but that's another story.

Published in the St. Giles & St. Nicholas Parish Magazine May 2015